This post is for all the Nasty Ladies out there.

Calling women out when they don’t comply with expectations of “niceness” and composure is not a new tactic.

Back in 2006 the chairman of the National Republican Committee, Ken Mehlman, said that “Hillary Clinton seems to have a lot of anger.”

Although politicians use lots of tactics to insult their opponents, the attention paid to women’s “anger” suggests that anger can be used against women to decrease their status politically.

Maybe you don’t like Hillary. So why should you care?

Because research suggests this goes beyond politics, and likely shows up in your workplace.

In 2008, researchers Brescoll and Uhlmann randomly assigned twenty-nine men and thirty women to watch a filmed interview clip where a male or female professional described feelings of either sadness or anger. Participants then ranked the interviewees on a) what status the target deserved in their future job, b) if they would hire the person, c) what salary they would pay them, and d) if they found them competent or incompetent.

Why was the woman who expressed anger given lower status and seen as less competent?

Because, women who express anger are believed to do so because of personal attributes.

In other words, people think women who express anger are “out of control,” maybe even “nasty.”

On the other hand, when men express anger people assume it’s because of an external circumstance, or something made him become angry.

So, what is a nasty lady to do?

Well, in a second  study, Brescoll and Ulhmann randomly assigned fifty-one males and eighty-two females to watch one of six videos, in which a male or female did one of three things: expressed unexplained anger, expressed explained anger, or expressed no emotion. In all six videos the person was upset because a coworker lied to them and caused them to lose an account. The participants ranked the male or female in the video on a) status, b) what salary they should receive, and c) whether they found them to be competent.

The angry man with no external reason for being angry was ranked the highest, suggesting that even when men become angry for no reason, people still perceive them as having one.

The angry woman with an external reason for becoming angry ranked higher than the woman who had no external reason. This suggests that if women provide a reason for their anger, it will cause less negative reactions.

So, if you find yourself angry at work or get labeled as a “nasty woman” by coworkers, make sure you explain the reason for your anger so that you are not seen as less competent, which could keep you from getting ahead.

Now, get out there nasty ladies and don’t  let “anger” be used against you.

Imagine this scenario. You recently landed a job with an outstanding company in your field (see image below).

As part of the onboarding procedure new hires take part in a company retreat. You know it includes physical activity which makes your nervous because, to put it nicely, you aren’t the most coordinated or athletic individual in the group.

Surprise! It’s an adventure challenge course that involves ropes, climbing, and heights to encourage communication, leadership, trust, and community-building. The company splits into four teams and each team needs a leader. The activity makes you uncomfortable because you’ve never done a challenge course before and think that someone else might have more skills to succeed as a leader. Your thoughts…

You have two options…

Option A: Put yourself out there and volunteer as a leader. This would separate you from rest of the new hires and give you more visibility with the company. It would show that even though you might not have the strongest challenge course skills, you have strong leadership abilities.

Option B: Choose not to risk it and let someone else step up. After all, you’ve never done a challenge course before and you don’t know if you’ll be able to lead a group through something so difficult and unpredictable.

Research says that women are often times thought of as less effective leaders than men. They are commonly perceived as lacking  assertiveness, strong organizational skills, and emotional stability. And what happens when women do exhibit these traits? Eagly, Karau, and Makhijani found that they are viewed negatively by others.

Task-specific self-efficacy (TSSE). This is one’s self-assessed ability to do a specific something that contains ambiguous, unpredictable, and stressful elements…bringing us back to the challenge course.

Dickerson and Taylor found that women can be affected by negative beliefs and perceptions of others, leading to negative self-efficacy that can hurt your career.

How? Well, negative self-efficacy can lead one to be less likely to take risks or take visible projects, two actions that can further your career.

Dickerson and Taylor’s  study gave women three pairs of managerial-type leadership tasks and asked them to select one task from each pair. The catch…one task was a leadership task and the other was a follower task.

What is the take-away? If women do not

Do not let yourself and your own perceptions of yourself hold you back from opportunities and possible success. You are competent. If you think you can’t do something, figure it out!

Now go out there and kick some ass! 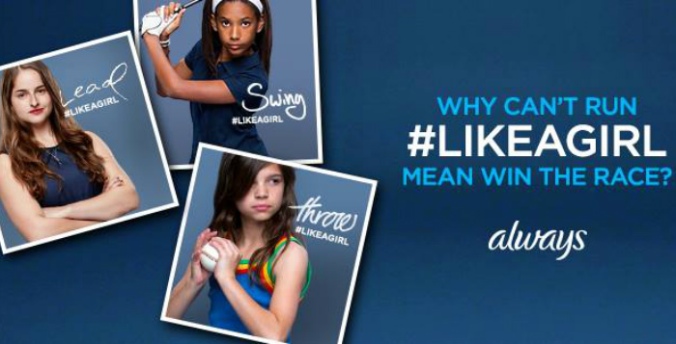 “You play well for a girl.”

“Your handwriting is really good for a guy.”

“You know what? You’re actually really calm for a girl!”

“Wow, you’re sensitive for a guy.”

I really started to think about these kind of comments when the #likeagirl advertisement campaign by Always came out a few years ago. Beyond just being insulting, these backhanded compliments reveal quite strikingly that there is a difference in expectations for men and women. Anyone who’s been a victim of these comments knows that they can be demeaning, but did you know that these ideas can affect your career?

You’d hope that everyone in your workplace is being compared to the same standards, right? Well if you’re one of our readers then you probably already know this isn’t the case.

Researchers Monica Biernat and Diane Kobrynowicz wanted to know more about the differences in perceived ability for low-status vs. high-status group members. They did this by designing studies focused on perceptions of white men vs. perceptions of women and African American men.

Here’s what they did to study the situation.

Study participants were given a resume and a job description and asked to evaluate the “applicant” for the job. There were two catches: although everyone evaluated the same resume, some had the name “Kathryn” while others had the name “Kenneth” and, while the job description remained exactly the same, some were titled “executive secretary” and some were titled “executive chief of staff.”

Do you see where this is going? Here is what they found:

When using objective assessment, women were judged more positively for the feminine job and men for the masculine job, but when using subjective judgments the researchers found the opposite: When “Kathryn” was applying for the Chief of Staff position, she was ranked higher than “Kenneth” (and vice versa with Kenneth and the Secretary position, although less reliably so). In other words, when participants were asked to assess actual ability, women were channeled into the feminine job, despite the fact they were subjectively assessed as really good (ah hem)…for a woman.

Stick with me here!

This sort of group-based competency perception might sound like it benefits women, because you don’t have to do as well to be considered competent. But picture this:

Imagine you just did a presentation at
work and you’re talking to your boss afterwards. He says that you did a really good job! This is great! He is finally recognizing you for your awesomeness! Problem is, as the weeks pass you realize he’s still treating you like what’s-his-name down the hall. But you thought he was impressed!

Here’s the problem. You’ve heard of stereotypes, right? Well we have stereotypes about competence as well. Imagine them like bell curves. An imaginary  bell curve for each group: One for white men, one for white women, one for African American men, one for native women… well, you get the point. What’s happening is you are really really great… for a girl. You’re all the way up on that tail, but your bell curve–the one for women–well it only reaches about half way up the men’s bell curve. You may be straining against the limits of your boss’s expectations for you but since you are still stuck on the women’s bell curve in his mind, you can only ever be as good as a fairly competent man.

Frustrated much?  Well don’t hulk out yet! Anger in the workplace may cause you a whole new set of problems (more on that in a future post).

One way to combat this is to keep track of your accomplishments at work. What projects have you been a part of? What were the measures of success for those projects? And what did you contribute to those projects?

I’m serious.  Get a sheet of paper and write them down. No really.  Do it now.

That way, when your boss is looking for someone to promote, instead of relying on his perception of competence, you have documented proof of how valuable you are and why you should be promoted–not what’s-his-name down the hall!